Scent is a subtle but powerful part of restaurant interior design. Because of its links to memory & emotion, it can make people spend more & stay longer.

(Welcome to Part 2 of our five-part series on the psychology of great restaurant interior design. Today’s post focuses on scent. Stay tuned for the next installments!)

You may have heard it said somewhere that you never really know the smell of your own kitchen. That’s fine if you’re a homeowner, but it’s a very different case if you run and/or manage a dining establishment. Scent, as a component of restaurant interior design, can influence not just diners' opinions of your business, but also their spending habits.

Why Scent is Important

As soon as your nose detects a smell, it triggers the olfactory neurons in the upper part of your nose, sending electrical impulses to a part of the brain called the olfactory bulb. These impulses are then passed along to surrounding areas, collectively known as the limbic system.

The limbic system plays a major role in regulating mood, memory, behavior, and emotion. It’s also widely regarded as the primitive part of the brain, because it has been found in the brains of the very first mammals. 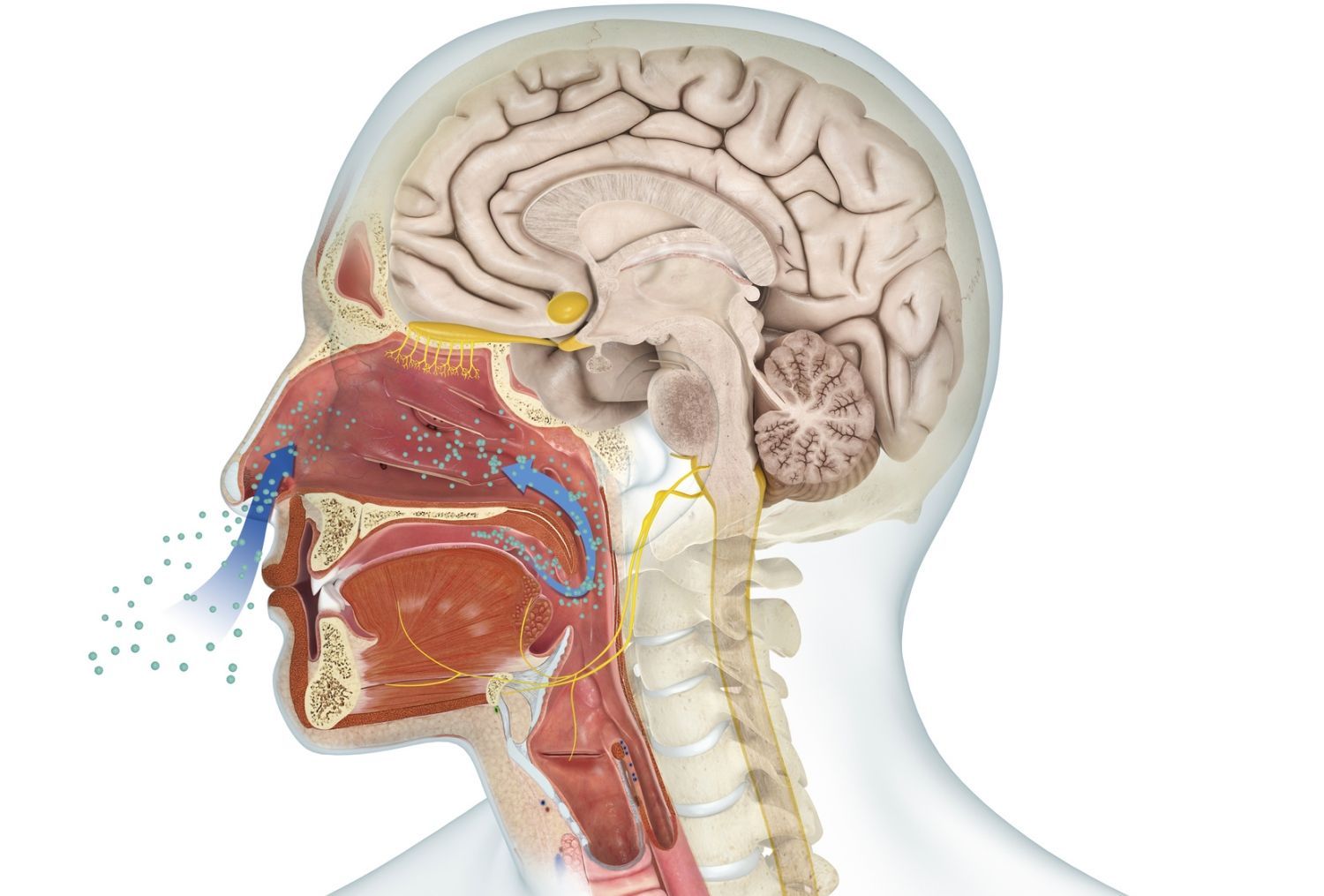 The sense of smell is very closely linked to memory, probably more so than any of our other senses. Think of certain foods you’ve eaten a lot as a child. If your mother often baked a lot of bread, passing a bakery may bring you back to afternoons spent in the kitchen of your childhood home, triggering happy, comfortable memories. On the other hand, you may hate broccoli today because its smell reminds you of all those battles of will waged at the dinner table.

Any bakery owner worth their salt knows this: It's why many bakeries are laid out similar to retail stores, with bread lining the walls and propped up on tables. Not only will the loaves tempt you with their beautiful, burnished surfaces, their aroma will also surround you. Many bakeries will even have burlap sacks of flour lying around for that homey effect.

The advantage of a bakery over a mere bread store, of course, is the smell of bread as it bakes in the oven. 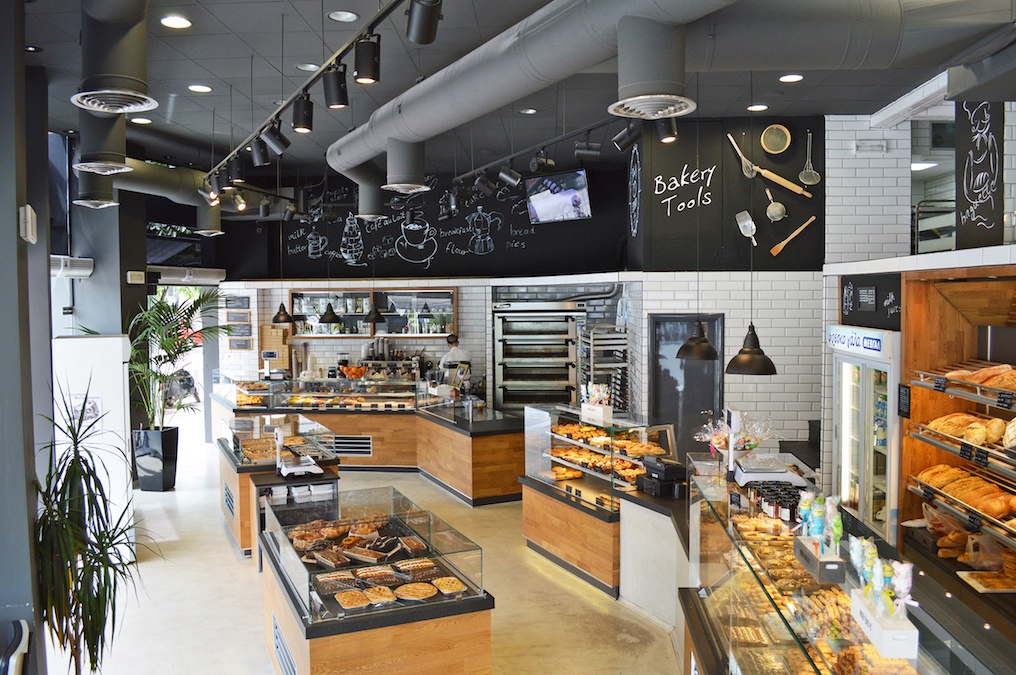 There are many scents that trigger similar responses in most people. Lavender, for example, relaxes the brain. Vanilla and chamomile reduce stress, anxiety, and depression. Citrus and peppermint increase alertness. 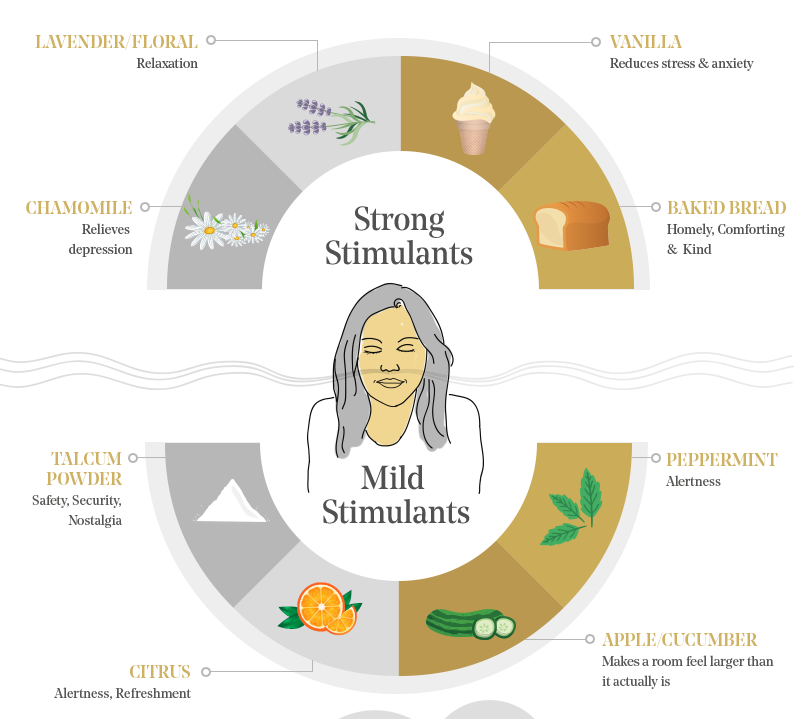 There are also smells that can change a person’s perspective of a room. Apple and cucumber scents, for example, make a room feel bigger and more airy. Barbecue smoke, on the other hand, makes a room stuffy and feel smaller than it actually is. 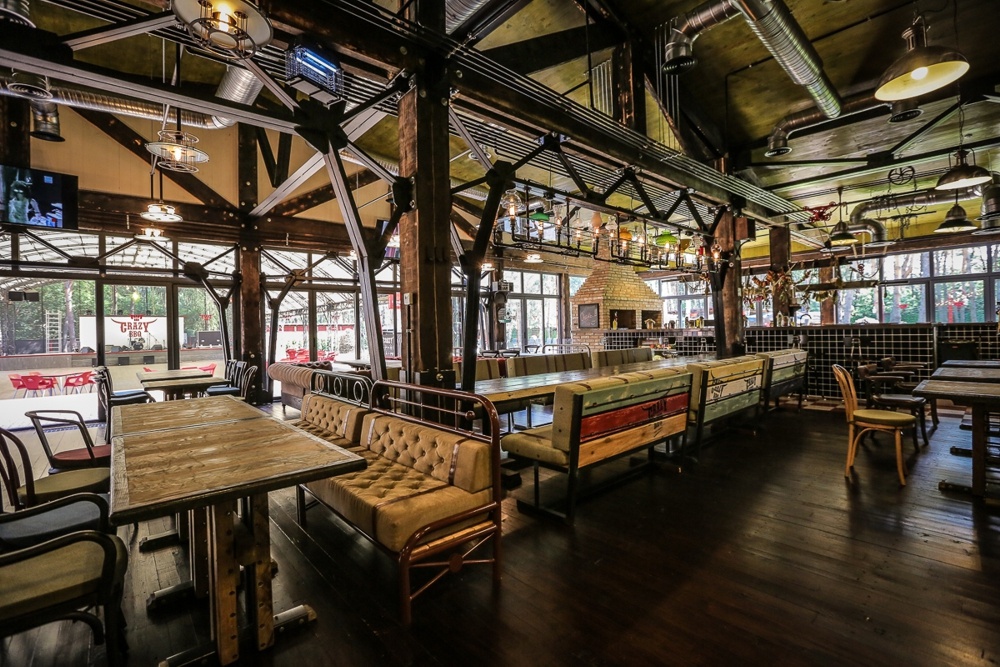 Those silver plate domes you often see in movies depicting fine dining restaurants? Not only do they keep the food clean and create a sense of mystery and surprise, they also allow the food’s smell to build up and concentrate. As soon as the waiter lifts that dome, the scent of your food hits you in the face with its full strength.

Cinnabon actually strategically places ovens near the front of its stores so the scent of baking cinnamon rolls can lure customers in. There’s also a good reason that Starbucks doesn’t allow people to bring in strong-smelling food. For a while, they even stopped serving sandwiches because they overwhelmed the smell of coffee. 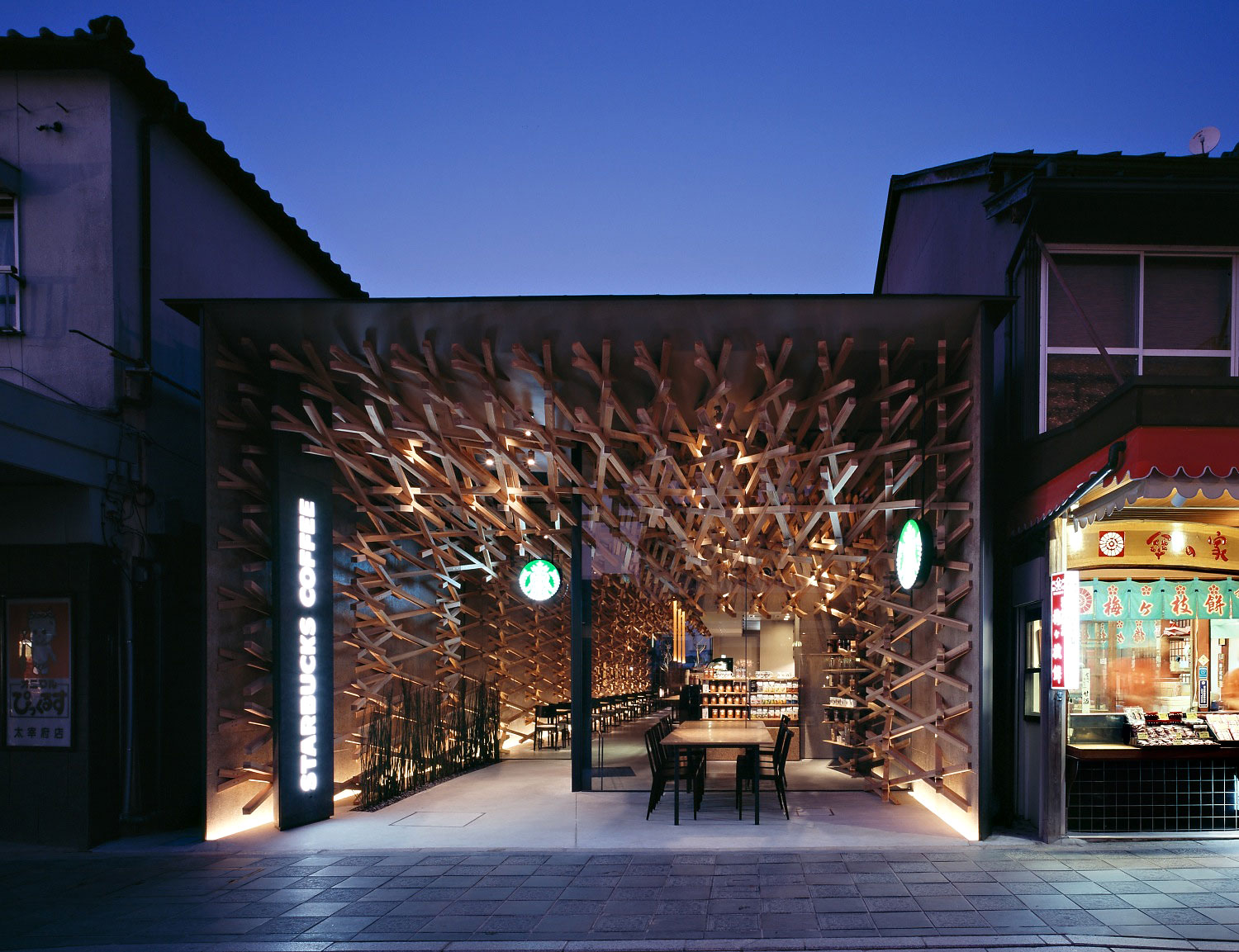 Kitchens also pump scents into the dining area through scent. And if their venting doesn’t allow them to do that? Restaurants can actually buy scents to compensate. Now you know that scent marketing is an actual thing — you’re welcome.

Scent is Worth the Investment

If buying restaurant scents sounds outrageous to you, it’s worth noting that the right smells can increase food sales up to 300%. According to a study by the University of Paderborn, scents increased impulse buying by 6%, buying intention by 14.8%, and the length of a customer’s stay by 15.9%.

An open kitchen design is another solution. Because there are no walls that separate the kitchen from the dining area, the smells from the cooking food will waft freely over to the diners.

There are other benefits to this, as well: Providing patrons with a behind-the-scenes view makes the atmosphere more personal, and conveys a sense of transparency. Having fewer walls also makes the restaurant appear larger and more airy. 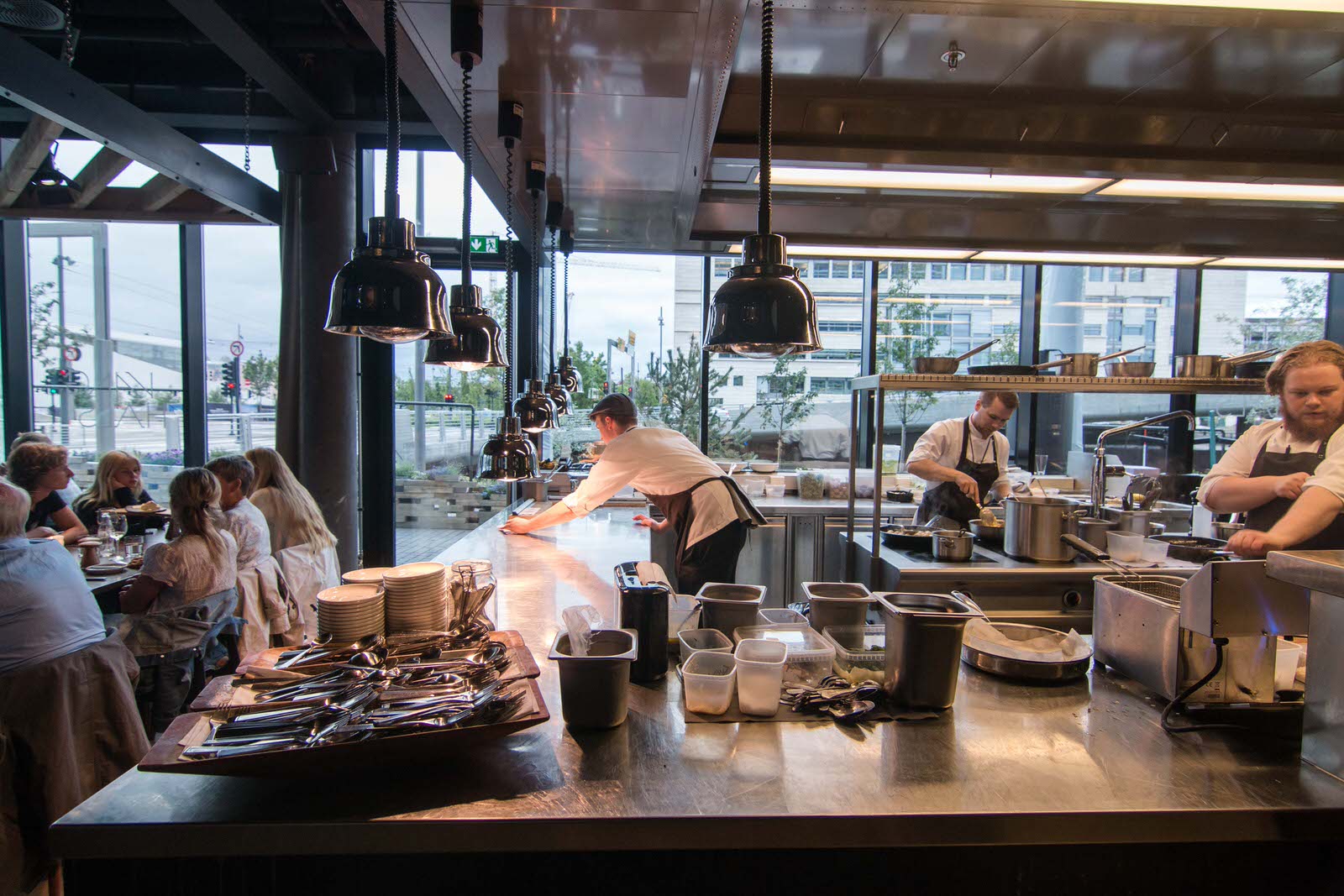 An open kitchen design is another solution, with many benefits besides scent. Image: Anders Husa

We hope you enjoyed Part 2 of our series on restaurant interior design. If you missed Part 1, you can read up on it here. We’ll publish the next installments over the next few days, so keep an eye out! In the meantime, try creating your own mood board and FF&E schedules with Fohlio.

You can also look through our past articles for tutorials and useful tips and tricks.

Color schemes for restaurant interior design don't just aim to please the eye: They are carefully orchestrated to trigger the appetite.

Restaurant interior design isn't just about a gorgeous space. It needs to clearly convey the restaurant's narrative and ensure operations are smooth.

There's much to be said about architecture and color in restaurant interior design, but those two things are essentially useless without light.

Get notified on new marketing insights

Be the first to know about new B2B SaaS Marketing insights to build or refine your marketing function with the tools and knowledge of today’s industry.